One of my cooking mentors is Aglaia Kremezi, noted cookbook author and owner of Kea Artisanals, a cooking school in Greece.

I am the Admissions Coordinator for the American Herbalists Guild, co-chair of their annual symposium, and have served several terms as a member of the AHG Governing Council (board of directors).

As the Herbalist-in-Residence at the Foxfire Heritage Center and Museum here in my hometown of Mountain City, I am working with students and volunteers to establish programming to keep alive the rich tradition of herbalism here in the Appalachians. 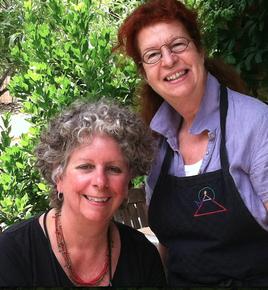 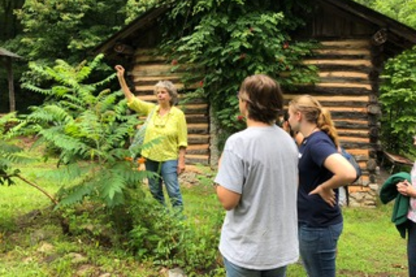 Leading an herb walk at the Foxfire Heritage Center and Museum 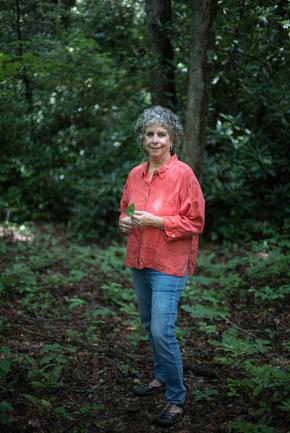 Because I believe that food is your best medicine, I have always been a passionate cook, following in the footsteps of my father and grandfather, both of whom were chefs, as well as my great uncle who once cooked for the royal family of Greece. Since 1999, I have been visiting Greece almost every year where the traditional cuisine of Crete, with its emphasis on wild ingredients, has inspired me to bring my knowledge of herbs and wild plants into the kitchen.

In 2000, Robinette Kennedy and I founded Wild Crete Travel LLC and began leading culinary tours on Crete. I also teach classes on Greek and wild foods cooking here in the United States between Crete tours.

I grew up on the shores of Lake Michigan in northern Illinois where I first fell in love with wildflowers. Later I attended The Evergreen State College in Olympia, Washington, where I studied media arts with an emphasis on film and television. After college I moved to San Francisco where I worked in the music business for a number of years as an audio engineer for Ella Fitzgerald, Peggy Lee, Jackson Browne, Bonny Raitt and many others. That was a wild and crazy time!

After completing the CSHS program and additional clinical training, I returned to the Midwest where I met Althea Northage Orr, an acupuncturist and herbalist, and founder of the Chicago Center of Psychophysical Healing and the Chicago College of Healing Arts. Together we started Living with Herbs Institute, the first herbal training program in Chicago. I also opened my herbal practice using an approach to herbalism that incorporated my training in traditional Western herbalism with the energetic principles of Traditional Chinese Medicine and a strong commitment to using local plant medicines.

In 1993 the Healing with Herbs Institute expanded and began to offer herb classes in Atlanta, Georgia. Five years later, I took over as the primary teacher and moved the school (and myself) to the mountains of northeast Georgia where we became the BotanoLogos School of Herbal Studies.

We are now celebrating our 28th year as the premier school for herbal studies in Georgia.  We offer lots of classes, workshops, and opportunities for field studies as well as webinars for distance learning.

​My book, Medicinal Plants of the Southern Appalachians, was published in 2006 and has been cited as one of the foremost resources on regional native plant medicines.